The Lone Star State may become a little lonelier – at least when it comes to big-rig trucking.

Waymo, the self-driving vehicle division of Google parent Alphabet, is about to start mapping in Texas and New Mexico as a prelude to testing its self-driving big-rig trucks. The mapping minivans, to be followed by the large trucks, will run primarily along Interstates 10, 20 and 45 and through metropolitan areas like El Paso, Dallas and Houston, the company said.

Waymo previously mapped and tested its big rigs in Arizona, California and Georgia. The latest move will add to that footprint as the company moves toward its vision of big rigs rolling down interstates with no one at the wheel, their sensors and computers making them safer than if they have a human in control.

Though Waymo doesn't appear to have any specific customers in mind yet – the big rigs won't be hauling freight during the test and will have a standby driver on board – the routes through Texas hold special appeal partly because the state is especially eager to accommodate autonomous vehicle experiments.

"Texas is very interesting to Waymo because it has very high freight volume and is favorable for AVs," said Vijaysai Patnaik, product lead for Waymo Trucking. 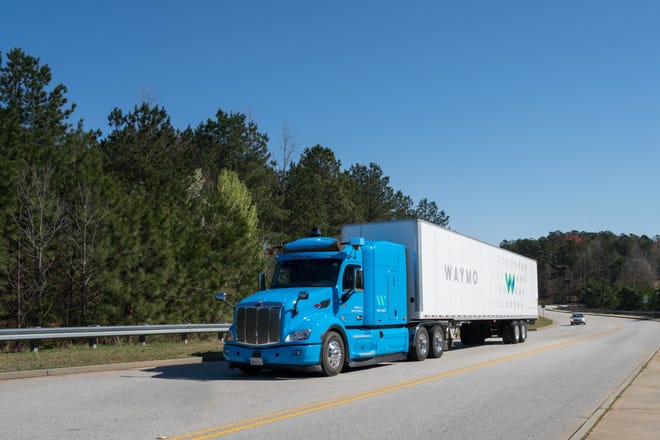 Though Waymo is best known for its self-driving ride-hailing minivan service in the Phoenix suburbs, where more than 1,500 passengers have signed up, long-haul trucking presents another lucrative, but competitive, opportunity.

Trucks carry 70% of U.S. domestic freight by tonnage, according to the American Trucking Associations. It rose 3.3% last year, the 10th annual increase in a row. Plus, long-haul trucking involves interstates that represent a less complicated environment for self-driving, which eases real-world testing and implementation.

If you're up for riding in a robotaxi ... General Motors' Cruise wants you to meet Origin — at some pointYet, the industry continues to be plagued by a shortage of drivers. The ATA says the industry fell short by 60,800 drivers at the end of 2018 and projects the shortfall could be as great as 160,000 by 2028. Waymo hopes its trucks could help plug that gap.

Patnaik said Waymo, however, stands out because it got an earlier start than rivals. Its self-driving car testing began in 2009. The trucks depend on the same combination of lidar, radar and cameras to sense the road, traffic, pedestrians, traffic signals and road hazards as the cars. But they are configured differently, taking into account trucks' longer stopping distances, generally slower driving speeds and different maneuvering characteristics.

"Our trucks test every single day in areas we operate in," Patnaik said. "We have been gaining meaningful experience in different locations and environments."

Pivot Tables made simple with atoti