6 Innovators Who are Shaping the World

The editors of TIME for Kids spoke with six innovators who are making the planet a more sustainable and accessible place for future generations. From Saieshan Govinder’s work tackling the youth unemployment crisis in South Africa to Srilekha Chakraborty’s initiatives that help girls in rural India learn and talk about their health, these game-changers are leading the way to a better world. 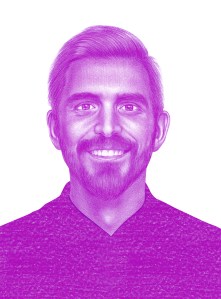 For wheelchair users, especially those who are unable to control their chair manually, Claudiu Leverenz’s Munevo DRIVE could be life-changing. It enables users to steer using head movements and smart glasses. The glasses have sensors that translate head movements into control signals, which are then sent to the wheelchair.

Munevo DRIVE has been available on the German market since January 2019. The response has been positive. “Immediately, the product gained so much traction and excitement,” Leverenz, 30, told TIME.

Back in 2015, while studying at the Technical University of Munich, in Germany, Leverenz and a classmate researched ways to enhance mobile independence among wheelchair users. “It became clear that the (wheelchair) industry is very traditional and hasn’t really changed so much,” Leverenz says. “They didn’t incorporate new technology and software into their products.” After graduating, Leverenz sought to turn what was a school project into a tangible solution. In 2018, he launched a startup with a mission to bring innovative technologies to those with disabilities. Munevo DRIVE is its first product.

Leverenz and his team are now working to bring the smart-glass solution to the global market. They hope to make Munevo DRIVE available to the rest of Europe and the U.S. this year. —Rebecca Mordechai

Solar energy is not new to some rural areas. Many homes use a small solar panel to power a couple of light bulbs and—maybe—charge a cell phone. “This was okay a decade ago, but its time has passed,” Tamhane says. “Everyone wants to step up in the energy level.”

That step-up is to community-owned solar power. Tamhane aims to build local networks, so villagers can pool their energy, freeing them of inefficient and unreliable utilities. Only a few homes would need a rooftop solar panel. Using a smart device, these homes could sell their surplus solar electricity through the village blockchain, much the way bitcoin is traded. Other homes connected to the grid can buy that electricity, then sell their surplus for credit to spend at any local store. The network can link up with the next village, and so on, creating a self-sustaining renewable-energy economy.

SPACE 10 has exhibited its 1:50-scale prototype around the world, pitching small-scale energy trading as a clean and affordable way of becoming less dependent on fossil fuels. “The future of utilities is going to be decentralized and has to be democratized,” says Tamhane. —Brian S. McGrath