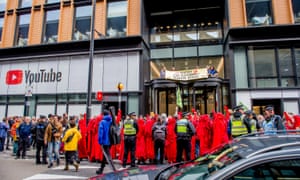 A climate protest outside YouTube offices in London in October. Now an activist group has accused the online video service of giving free advertising to factually inaccurate videos.

Some of the biggest companies in the world are funding climate misinformation by advertising on YouTube, according to a study from activist group Avaaz.

The group found that more than 100 brands had adverts running on YouTube videos on the site that were actively promoting climate misinformation. The brands, including Samsung, L’Oreal and Decathlon, were unaware that their adverts were being played before and during the videos.

“This is not about free speech, this is about the free advertising YouTube is giving to factually inaccurate videos that risk confusing people about one of the biggest crises of our time,” said Julie Deruy, a senior campaigner at the group. “YouTube should not feature, suggest, promote, advertise or lead users to misinformation.”

For the report, Avaaz examined videos pushed to users when they search “global warming”, “climate change”, or “climate manipulation” on the site, focusing particularly on those giving high prominence by YouTube’s recommendation algorithms. It found that 16 of the top 100 videos on the first term contained misinformation, as did eight of the videos found under “climate change” and 21 of those under “climate manipulation”.

“YouTube has previously taken welcome steps to protect its users from anti-vaccine and conspiracy theories,” Avaaz argued, “but has not acted with equal force against broader misinformation and disinformation content, including climate misinformation.”

The group called on YouTube to implement new policies to prevent the further spread of climate misinformation on its platform. It said the site should:

In a statement, YouTube said Avaaz’s report had its own transparency problems. “We can’t speak to Avaaz’s methodology or results, and our recommendations systems are not designed to filter or demote videos or channels based on specific perspectives. YouTube has strict ad policies that govern where ads are allowed to appear and we give advertisers tools to opt out of content that doesn’t align with their brand. We’ve also significantly invested in reducing recommendations of borderline content and harmful misinformation, and raising up authoritative voices on YouTube.

“In 2019 alone, the consumption on authoritative news publishers’ channels grew by 60%. As our systems appear to have done in the majority of cases in this report, we prioritise authoritative voices for millions of news and information queries, and surface information panels on topics prone to misinformation – including climate change – to provide users with context alongside their content. We continue to expand these efforts to more topics and countries.”

A L’Oréal spokeswoman said: “The information promoted by these videos is in direct contradiction with L’Oréal’s commitments and the work we have been carrying out for many years to protect the environment. We are collaborating with YouTube teams asking them to use all the technological means at their disposal to better inform the platform’s users about the nature of these videos and to limit their impact.”

We've got an announcement…

… on our progress as an organisation. In service of the escalating climate emergency, we have made an important decision – to renounce fossil fuel advertising, becoming the first major global news organisation to institute an outright ban on taking money from companies that extract fossil fuels.

In October we outlined our pledge: that the Guardian will give global heating, wildlife extinction and pollution the urgent attention and prominence they demand. This resonated with so many readers around the world, and we promise to update you on the steps we continue to take to hold ourselves accountable at this defining point in our lifetimes. With climate misinformation rife, and never more dangerous than now, the Guardian's accurate, authoritative reporting is vital – and we will not stay quiet

We chose a different approach: to keep Guardian journalism open for all. We don't have a paywall because we believe everyone deserves access to factual information, regardless of where they live or what they can afford to pay.

Our editorial independence means we are free to investigate and challenge inaction by those in power. We will inform our readers about threats to the environment based on scientific facts, not driven by commercial or political interests. And we have made several important changes to our style guide to ensure the language we use accurately reflects the environmental emergency.

The Guardian believes that the problems we face on the climate crisis are systemic and that fundamental societal change is needed. We will keep reporting on the efforts of individuals and communities around the world who are fearlessly taking a stand for future generations and the preservation of human life on earth. We want their stories to inspire hope.

We hope you will consider supporting us today. We need your support to keep delivering quality journalism that’s open and independent. Every reader contribution, however big or small, is so valuable. Support the Guardian from as little as $1 – and it only takes a minute. Thank you.

What is edge computing?

What is web server?

A web server is software and hardware that uses HTTP (Hypertext Transfer Protocol) and other protocols to respond to client requests made over the World Wide Web. The main job of a web server is to di