During the launch of Microsoft’s dual-screen Surface Neo, one of the few physical demos was of a keyboard that sat at the back of the computer and flipped around onto one of the screens. This left a third of the screen to act as a rather large touch bar, with the combination feeling remarkably ‘laptop like’.

Recently published documents by Microsoft have suggested one way this keyboard will work. 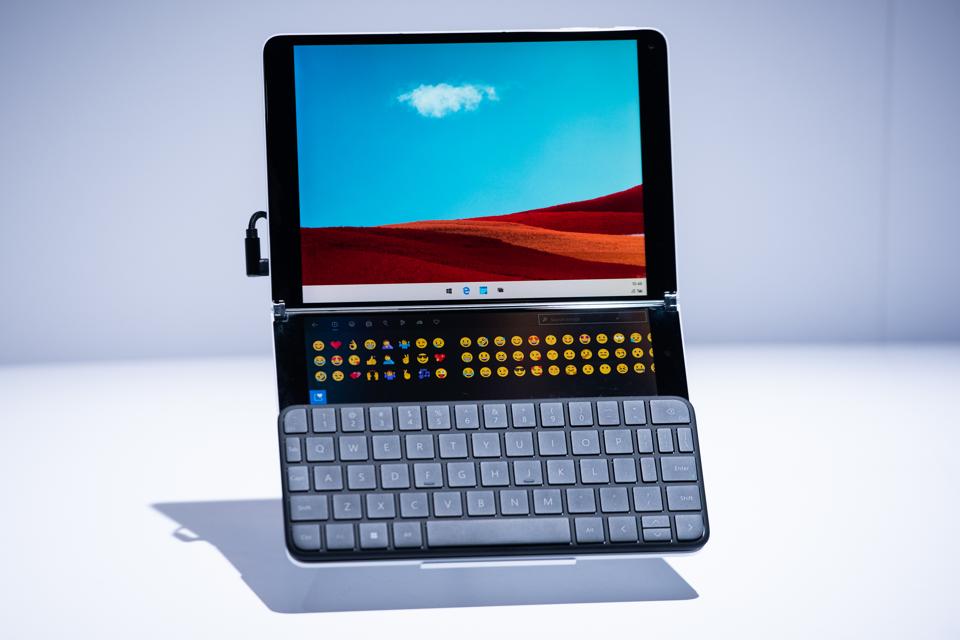 Published this week (but filed in July 2018) a patent, titled “Mechanical Keyboard Overlay For Touch Screen” describes a keyboard cover where a press of a key would be translated onto the touchscreen by physical movement on the opposite side of the keyboard cover. Mayank Parmar describes the system:

"Surface Neo, which runs Windows 10 X, supports a magnetic keyboard that covers the two-third of one screen. Microsoft’s new operating system recognizes the keyboard and it shrinks the one-third of the display to render a rich input area where you can open certain apps or emojis.

Curiously, this isn’t a new idea - just a new interpretation. The Symbian UIQ-powered Sony Erricsson P800 (one of the first generation smartphones) launched in 2002 with a touchscreen that filled most of the front of the device. It also had a flip-down protective cover with a standard 12 key number pad. When the flip was closed, the number pad keys pressed directly on the touchscreen when dialling.

Go back even further and you can find a clip-on joystick for the now classic 8-bit ZX Spectrum that physically pressed down on the four cursor keys. The year? 1982

Expect some new ideas on this principle, such as the use of transparent plastics to mimic backlit keys or highlight specific keys through the keygap. Or the continued deployment of magnets, with the keyboard cover attached by magnets and smaller magnets used by the Surface to detect when the keyboard cover is in place.

With the Surface Neo (and the associated Surface Duo) expected to be available in Q4 2020, we may have a long wait to see just how the keyboard cover will work. Or it may be demonstrated to developers in the near future and we all get the next step in this Surface story confirmed.